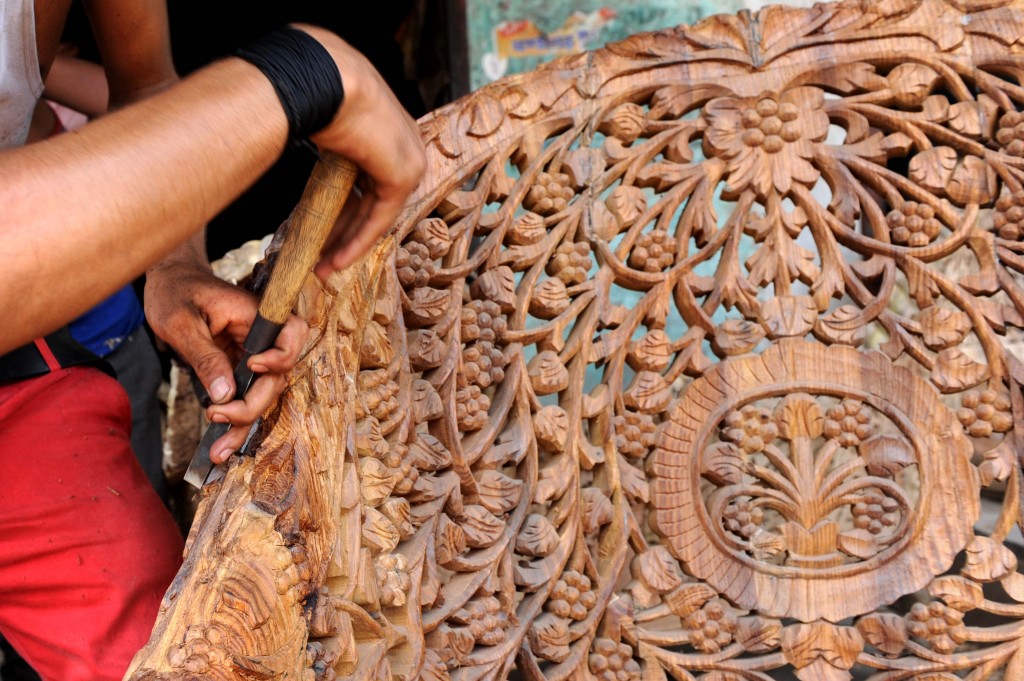 India is the land of art and craft culture. From the early 2500 BCE period to till date, significant and steady growth has been observed in the field of Indian handicrafts and handicraft industry. The history of Indian Handicrafts dates back to the glorious period of the Indus Valley civilization.

During the initial phase, the Indian handicrafts culture revolved around basic day to day things like utensils, jewellery, and clothes. Though it was quite early, the amount of technical superiority in their work still amazes today’s historians. Moving ahead in the timeline, various improvements could be seen in the Indian handicraft industry.

Making time travel through the Mayurian period, Kushana Empire, Medieval period and finally landing to 21st Century, the Indian Handicrafts made a quality transition and expanded itself in various fields like sculpture, pottery, textile, glasswork, terracotta, leatherwork, grave painting, and enamelling and metalwork.

The industry has proved significant in employment generation across the country. The amount of skills exhibited by the Indian craftsmen has received a global appreciation and recognition, following which the requirement of Indian Handicrafts in the global market is on a continuous increase. As a result, this industry has become a major pillar behind the strengthening of the Indian economy.

Though expensive, the Indian Handicrafts have a massive response and demand in the global market. According to the official finance reports published by the Export Promotion Council for Handicrafts (EPCH), major countries like the USA, UK, UAE, Germany, France, Canada, Latin American Countries, Italy, Australia, and the Netherlands are the top 10 importers of the Indian Handicrafts. Adding on to this, the official reports also state that, “The Handicraft exports from India have increased by 1.65 per cent year-on-year during April-November 2018. Which accounts for US$2.42 Billion”. Isn’t it amazing?

GI tagged Indian goods like shawls, woodwares, house-wares, home-textiles, lighting, furniture, and bamboo goods have captured the attention of the international market. Marketing giants like Alibaba, e-World trade, and go4WorldBuisiness are the huge buyers of these Indian goods.

The traditional items like the Pashmina shawls from Kashmir, Red Sandalwood cutlery from Andhra Pradesh, the Kumbli wood figurines from Kerela, the Kazgi pottery of Alwar and the beautiful leather products of Madhya Pradesh have created a huge buzz among the art lovers.

2. Zardozi-embroidery.
The Zardozi Embroidery work industry; though rare, it is known to have been working since long. It’s beginning dates back to the 17th century during the reign of Mughal emperor Akbar.

This form of art includes making elaborate designs on dress materials like silk and velvet. The only notable difference that has been observed over the years is that the embroidery which was initially done with pure silver wires and real gold leaves is now replaced with cheaper alternatives like silver or gold polished copper wires. Studded pearls and precious stones and gems are used as well.

This artwork is famous in the Southeastern part of the country. Craftsmen from Lucknow, Hyderabad, and Bhopal have been practising this art since generations together.

3. Saree Work Industry:
Though Dhoti is the National dress of India; Sari – the Traditional Indian Female Outfit has undoubtedly become one of the national recognition of our country. The amount of skills portrayed by the Indian Craftsmen in the Sari Industry is indeed remarkable.

Various types of Sarees like Maharashtrian Paithani and Navsari, the Madurai Silk Sarees, the Kanchipuram Tamil Saree, the Bengali Cotton Sarees, and Mundu (Kerala Saris) have a great local and international demand. The Textile Industry consists of carpet weaving and shawl weaving work as well. Cities like Srinagar, Jammu and Kashmir, Bidohi and Uttar Pradesh have major carpet weaving centres.

4. Wooden Work Industry:
The Wooden Work industry is another big asset for the Indian Economy. In Demand Durable Woods like Sandalwood, Sal, Teak, Marandi, Rosewood and Satin Wood are used popularly for making goods like furniture, decoratives, and doors.

5. Brass Work Industry:
Another important Sub-industry that cannot be ignored while talking of the Indian Handicraft Industry is the Brass Handicraft Industry. The Brass Artwork is well known for its durability and mouldability. The brass material can be easily given shape and it’s better resistance to corrosion feature is an add on the advantage which makes it better than copper.

The diverse products of this industry include Brass Postures of Deities and famous personalities, tabletops, Wine glasses, Storage boxes, Vases, and Lamps. The State of Rajasthan is famous for this artwork, where the craftsmen known as the Kansari’s are present at large. Moradabad and Sharanpur are some of the important contributors to the Industry as well.

6. Bamboo Work Industry:
The Bamboo Industry of Assam, West Bengal, and Tripura is famous for goods like Baskets, mats, furniture, wall decoratives, crossbows and rain protection coverings. This Industry falls under the ‘small budget industry’ category. It is prasticed by localities who live in small huts. It is a household industry.

7. Glass Work Industry:
The Glass Industry is one of the most upcoming industries found in India. Since Silicon is required for the production of the glass products, the glass handicrafts industries are mostly situated near coastal regions from where sea sand rich in silicon can be obtained easily.

Various glass decoratives and day to day goods are used by us every day. Glass can be given various colours and shapes which makes them easy to handle. Though glass breaks easily, it’s attractive look and transparency feature makes it a hot selling product in the market.

The Unsung Importance of the Indian Handicrafts:

It is very obvious that the Indian Handicrafts are an important part of the overall development of the country. It not only strengthens the economy by providing GDP but it also helps is providing employment to over 7 Million Indian Artisans. The importance of the people working in these industries can never be neglected.

The Indian Handicrafts Industry is hence considered as one of the strongest pillars of the nation. The industry has prominently kept the art and tradition of our nation alive. We certainly can’t ignore their efforts and skills.

When you travel to any Indian states you can get to see and bring home the wonderful creations, or you can also buy online.

So, hope you now know about Indian Handicraft Industry and the  next time you go out for buying an article, make sure that you have a MADE IN INDIA Label on it and not a MADE IN CHINA one!

3 thoughts on “Indian Handicraft Industry: Much more than what you can think of!”